.....was what the people in Zaïre where shouting during "the rumble in the jungle", the epic fight between Muhammed Ali and George Foreman, today 34 years ago. It means "Ali, kill him!!" 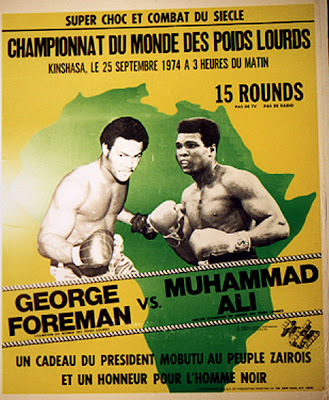 Now don't be fooled by the date on the poster, 25th of September. The fight was delate because Foreman was injured during his training.

The fight was the main attraction in a great festival with some of the greatest artist of the seventies; James Brown, B.B. King, the Spinners and many more. No one thought Ali could win, but using his rope-a-dop strategy, wearing Foreman out, he was able to knock him down in the 8th round. 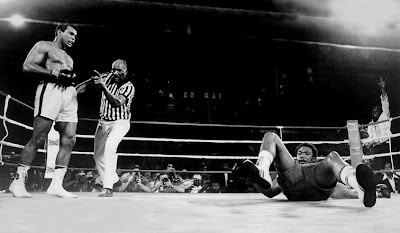 Like 70's soul and boxing? Like Muhammed Ali? Then you should see the Acadamy award winning documantary "when we were Kings". Containing the compleet fight in Zaïre, and that other famous fight against Frazier "a thrilla in Manilla"

"if you think the world was surprised when Nixon resigned,
wait till I kick Foremans behind!"

" I'm bad,
been chopping trees, I done something new,
I have wrestled with an alligator, I tussled with a whale.
I handccuffed lightning, thrown thunder in jail!
That's bad!
Only last week I murdered a rock!
Injured a stone!
Hospitalised a brick!
I'm so mean I make medicine sick!"