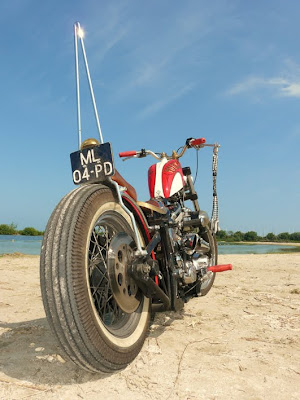 I've come along way from nowhere,
I've seen a lot of nothin' along the way.
But the stuff I've seen often disappears
all by the end of the day.

I travel by night because I like the darkness
and the road gets quiet as I go.
The coolness of the evening keeps my
blood at bay and the stars lend me quite a show.

I've been across deserts and high plains,
across large lakes and awesome seas.
Rode through tornadoes and hurricanes,
and heated jungles following a cool mountain breeze.

I take the long roads less traveled by and
often go through life alone.
I've been called a vagrant, a transient and a wanderer,
but I prefer being known as the rogue.

I'm not looking for my inner-self
or trying to find my way.
I've been down all those empty roads and
chasing someone else's ideals don't pay.

I know who I am and what I'm about,
I know where I am all the time.
I know that I love my life on the road
and not following your dreams is the crime.

I refuse to live my life in a box,
gathering things I possess.
I refuse to follow society's rules,
for that I am considered useless.

A person with freedoms not controlled,
an animal outside the gated pen.
I live my life on the outskirts,
and do things when I say when.

For all this I'm labeled as a bad man,
a scoundrel, a crook and a knave.
But let the judgment fall on them
who judge me, for I've seen how they behave.

I take the long roads less traveled by and
often go through life alone.
I've been called a vagrant, a transient and a wanderer,
but I prefer being known as the rogue.
Posted by Sik at 3:00 PM

That be some truesome shit thou hast laid down on my screeneth here.