..... is going on at Greaseheadquarters??? No new posts for almost a week???
Yeah, well.... sorry folks. I'm really busy at the moment. I was workin' on some cool things allready conserning some upcoming chopper-partys when I received an e-mail from Beer last week. Beer is member of 1%er club Rogues MC Opmeer, posting on Church on choppers and is organising one of the coolest chopper shows in the Netherlands for 18 years now. 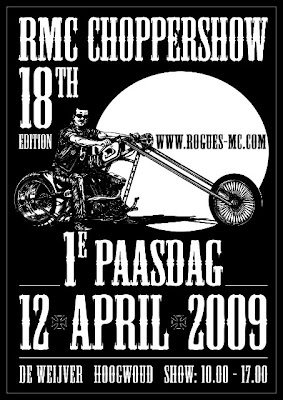 Beer had a great idea, he wanted a B-movie bike booth on the next choppershow, in April, and was hoping I could dress the booth up a little with some items from my Mexican garage bar, "el Taco-Bar". Hell yeah, I was going wild, best idea ever! Actually I had so many ideas that it was all right with Beer when I'd take care of the booth all the way.

So right now I'm busy with contacting a lot of people with bikes that would fit this profile, and realising the booth. I have to say that I'm really honoured that I've been asked to do this!

I won't show anything of the preparations or bikes until the show is over, sorry for that. Right after there will be enough to post right here!

Sad thing is that I will be posting a little less than usually the next few weeks. Hope you all will understand.

Good lucky Amigo! Can't wait to see the booth, I'm sure you'll make something beautiful! Kick (someones) Ass!
I'll put a post for you on my blog then ha ha ha! Have fun.

Succes, sounds like a good idea! I see you there at the show!